While working on one of my side-project, I’ve had the need to render a kind of neon or glow effect on images (think the effect used everywhere in Tron). Something very close to the bloom effect used in video-games. I’ve needed to do this using software rendering (computed on the CPU), because it will run on a server without any GPU (note that it must not be confused with the bloom filter data structure).

In reality, the bloom effect is produced by the lens of cameras which can never perfectly focus, and, to cite the Wikipedia article :

How to replicate the effect

This image is composed of three rendered elements: a gray background, a red rectangle and a red circle. 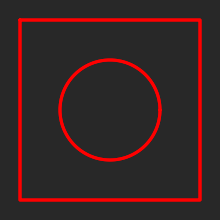 Everything looks flat and a bit boring: for a nice effect, we will want the red rectangle and the red circle to have some bloom effect. We want: 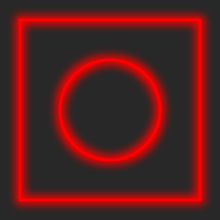 In a rendering pipeline, you control what you draw and in which order, it will then be quite easy to apply an effect only on some parts of what you’re rendering and in this case, on the red lines.

The rendering process will be:

After this, the first buffer should be containing neat red lines with bloom effect on top of a gray background. But in this rendering process, what does Apply the bloom effect mean?

For the rendering, I’ve used the excellent gg library. Drawing lines, rectangles and texts is straight-forward with it.

For the graphic effects, I’ve selected bild which is really easy to use and which I also recommend.

Basically, having a camera out of focus means that the captured image is blurry, and we previously said that this is noticeable with bright sources of light.

Then, what we will want to do is to blur the red lines, because here, it is our source of light. After having blurred their lines, we draw them on top of the gray background. Let’s check out the result using the Gaussian blur shipped in the bild library: 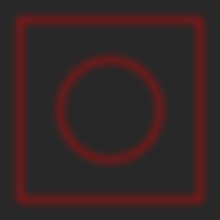 We immediatly see that it is not really the final effect that we want: the source of light has kind of disappeared, becoming blurry but way darker.

We’ve lost our source of light? OK, let’s draw it again on top of the blurred one: 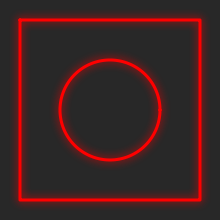 We are getting there, however, in this image I think that the effect is… too light. pun

The solution is to simply use a bigger source of light before applying the blur. In order to have this improved source of light from the rectangle and the circle: we want to dilate them first. Their lines will be bigger and we will then apply a blur on a larger source of light. Hopefully, the bild library is shipping a dilate effect. 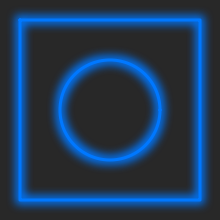 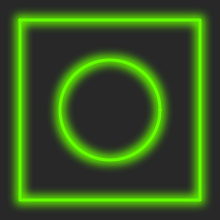 At this point, I think it is what we were looking for!

We’ve seen that to imitate the glow or bloom effect on an image by:

Please note that I’m not an expert in image processing, especially not in colors and lights theory. I hope that this article could be helpful to someone else.

Here’s the full code for this article: